Oh my gosh! I really can’t explain the feelings I have for Attack On Titan! Season one was pretty shocking with all the deaths and changes, but season two is a whole new emotional rollercoaster. This is the subject for today! 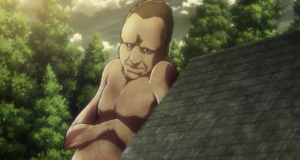 Predicting The Armoured And Colossal Titan

Before I begin I need to remind you that this will contains spoilers and my dumb, already thought of opinion.

If you pause at the moment on the old tower when the titans are attacking, the frame moves to Reiner and Bertholdt. If you pause it, you will see that Bertholdt is up am deathly ready to transform as his hands are lingering near his gaping mouth! This occurs in episode four, “Soldier”. 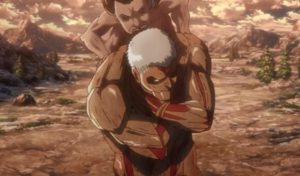 The end fight scene with Reiner is really gripping and frustrated me greatly but that wasn’t the only thing that made my insides boil… Wow, I really like anime huh… Anyways!! If you recall in episode one season one (grab you’re history Mangas!) Eren’s mother was eaten by that dreadful ‘Smiling Titan’! My friend told me a theory that it was Eren’s dad’s ex-wife but I’m not too sure. But, later on in season two, ‘she’ or ‘it’ I suppose reappears! And this time, Eren’s unable to transform to kill it. Hannes is sadly devoured by the ‘Smiling Titan’ as he couldn’t take it on by himself, hence why Eren tried to transform. The onion ninja broke into my room at this point… Why do I torture myself by watching this?!

Mikasa and Eren Are… Cannon

Nope! In my opinion, this ship should not exist… OK, yes it should! But that is not what we are talking about today. I think we should highlight the part where Mikasa and Eren were about to kiss but Eren completely brushed it off and walked off! Yes, maybe for the safety of humanity or whatever but, the rejection was priceless! I cracked up again then went back to crying…

No Arm For Eyebrows

Yeah, so, this is not an insult to people without arms. Just a disclaimer for those nit-pickers out there! I see you! Our heroic eyebrows, Commander Erwin, lost an arm in battle but soldiered on! I thought for a moment that he would be killed and that I would never be able to see his eyebrows again but no, he survived! And the onion ninjas attacked!

Also, just want to add a small one of my peeves, Levi was not in a lot of this and he’s one of my favourite characters. Obviously, this is because of his ankle incident with Annie so he was recovering. Get well soon those who were injured in Attack On Titan. Sending my love!

Written By
JJAnime
More from JJAnime
Hi. I’m JJ. This is my first ever post here. I’m a...
Read More