Back in October, we made a really big purchase.  Literally.  It’s a Transit Hicube, long wheelbase.  The plan was to convert it from a van into a camper and that’s what we’ve been doing. 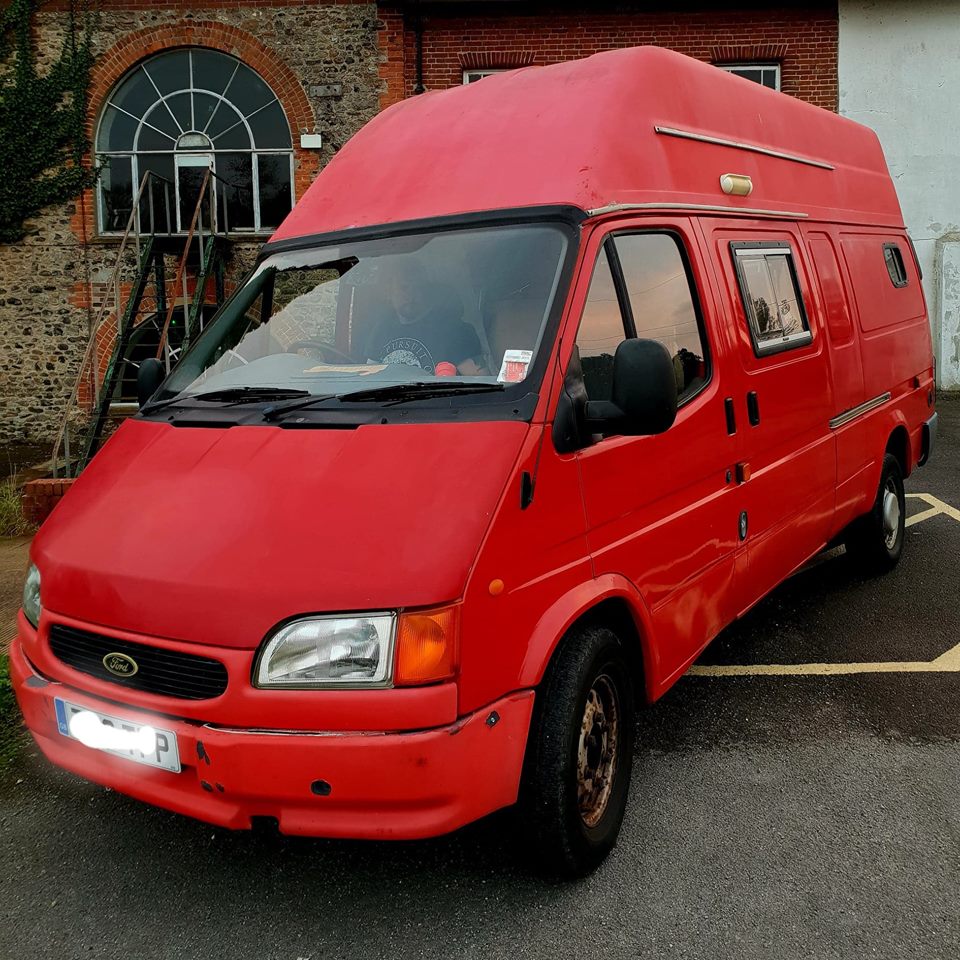 We started by welding up a small patch that was showing rust and by insulating the floor because that was the only part that had to be done.  We just used foil flooring underlay because there are two layers of carpet on top of the wood.  The back door hinges also needed welding up because they were hanging off. 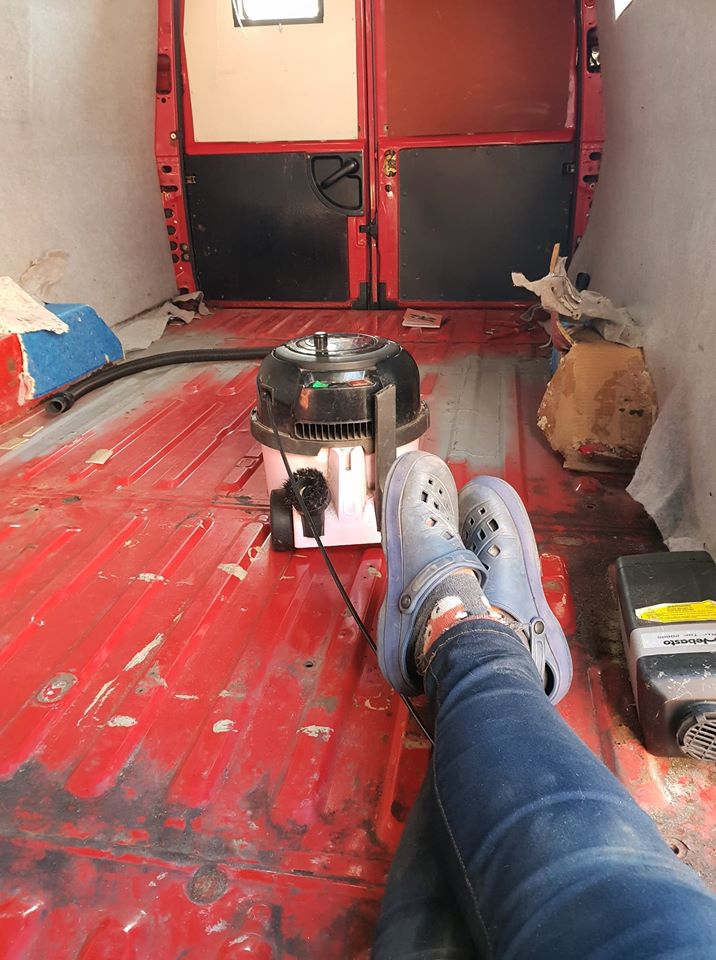 We bought extra seating from the previous owners who had intended to have them fitted.  They are minibus seats that we’ve bolted to the floor to allow for the children to be able to come out with us.  This was controversial because it meant that we couldn’t have a bathroom (grr).  The children adore coming out in the van so we made the right decision.

It was at this point that we realised the electrics weren’t quite how they should be so they needed altering and the Webasto heater also needed some work.  This bit was boring, in my opinion, because I couldn’t see much changing.  The foundations for the bed were made. 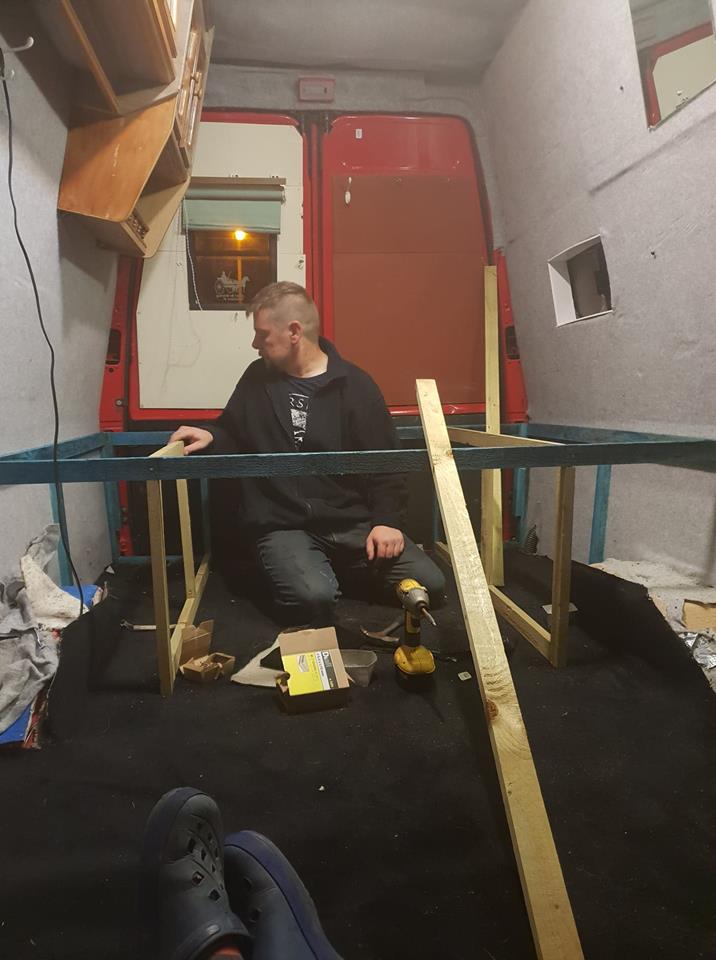 We had the bed this way for a month or so and realised it just wasn’t big enough for us.  At 5’10 and 5’11, the van just wasn’t wide enough for us to have a bed sideways on.  Back to the drawing board.  So annoying because I swear we must have spent something along the lines of £200 on poxy wood!

MrLovely built the kitchen part of the van with drawers underneath. 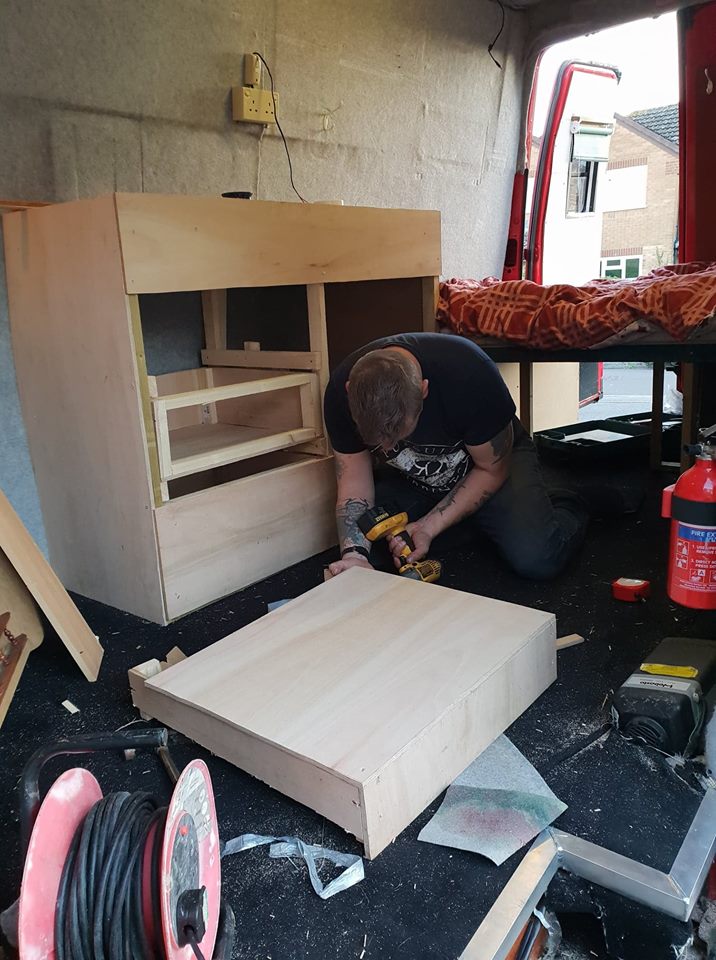 MrLovely then happened across and chat in a VW owners group who was removing the interior of his T4 to turn it from a day van, back into a works van.  A deal was made with two crates of cider (homemade) and we now have ourselves a new bed! 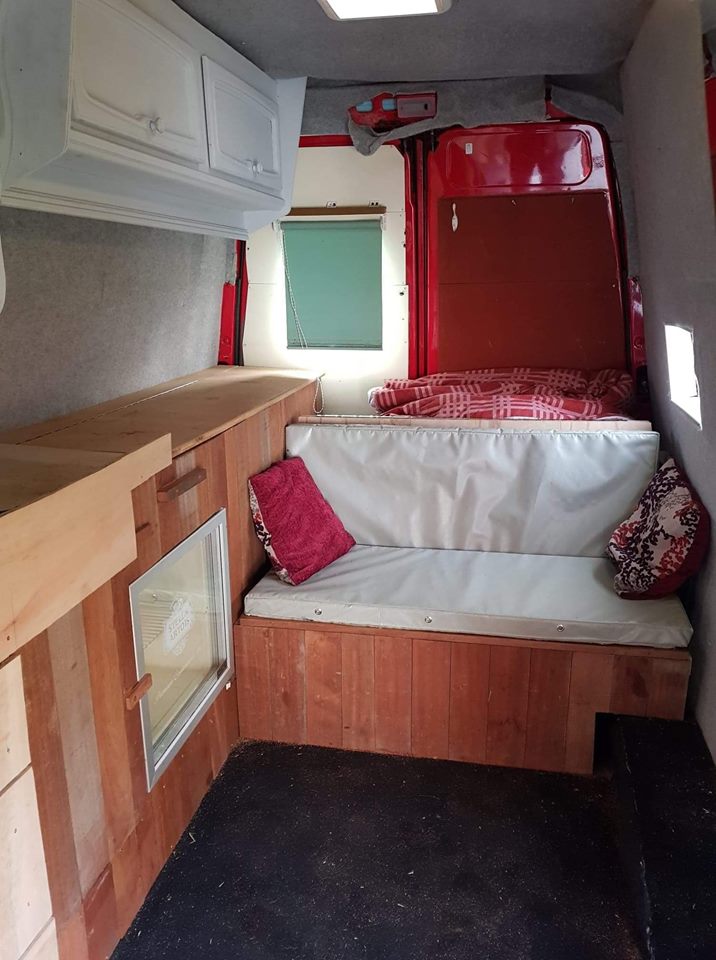 You may notice from the above photo that the ugly cupboards are now looking lovely.  We took them down and painstakingly peeled off all of the nasty Formica covering, sanded it back and painted it using a Valspar tester pot in the shade Bottlefly Wings.  I used two tester pots which covered both cupboards twice.  They look lovely now, thank goodness because I wanted to use what I could rather than have to have new cupboards made. 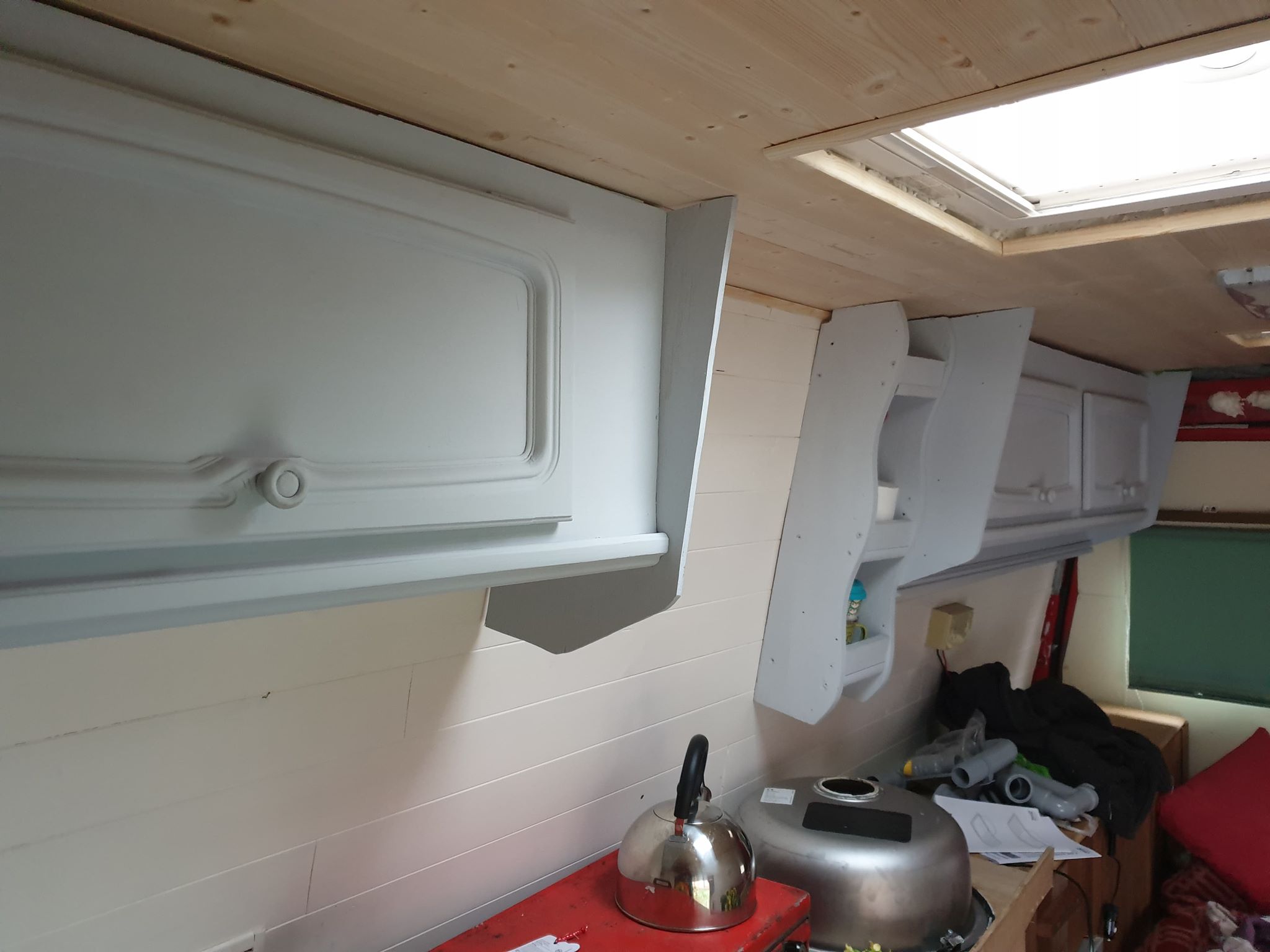 To me, this was the exciting bit.  I knew from the get-go that I wanted to clad the walls and I wanted it painted white.  The used somewhere in the region of 18 packs of cladding to do the walls and the ceiling of the van.

My local B&Q have a Valspar counter and then some!  They have hundreds of colour charts and MrLovely and I browsed the whites.  It was really funny because you’d think it would be a simple choice, but no.  There are so, so many different shades and tones of white to choose from.  The man that worked there was really friendly and helpful.

Once we’d eventually settled on the shade we wanted (At The Barre), we had to decide on the finish we wanted (I think the options were satin, gloss or eggshell).  We went with the one with the least amount of shine.  Then, the man typed something into the computer, got the paint out and then popped in into the machine for it to be mixed. 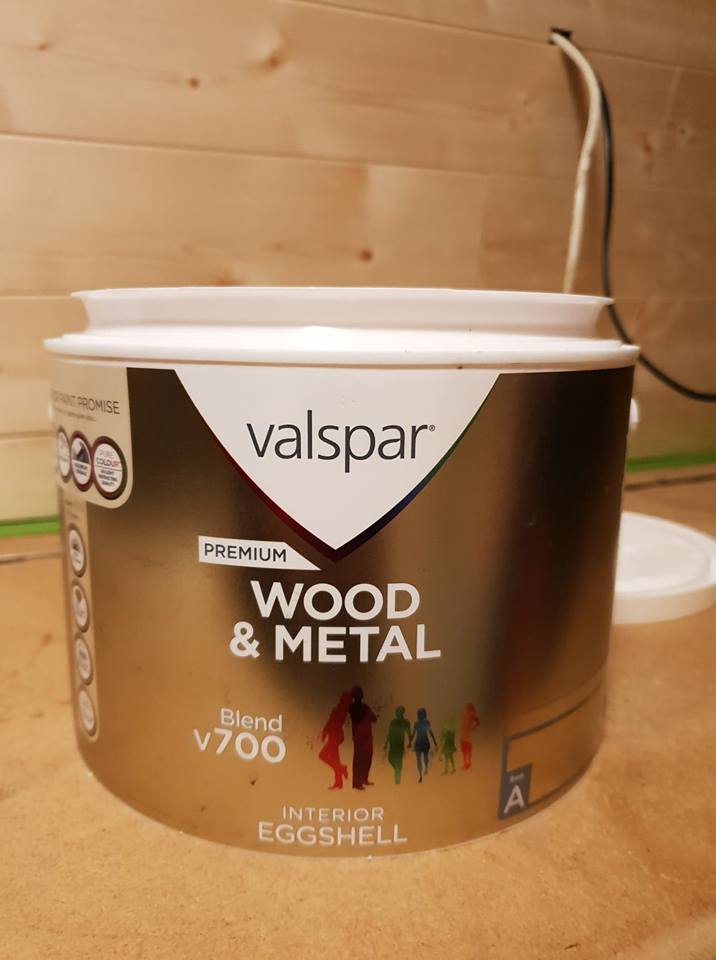 There’s virtually no smell from this paint, which means the VOC rating is good.  VOC stands for Volatile Organic Compound which can be very toxic when inhaled. 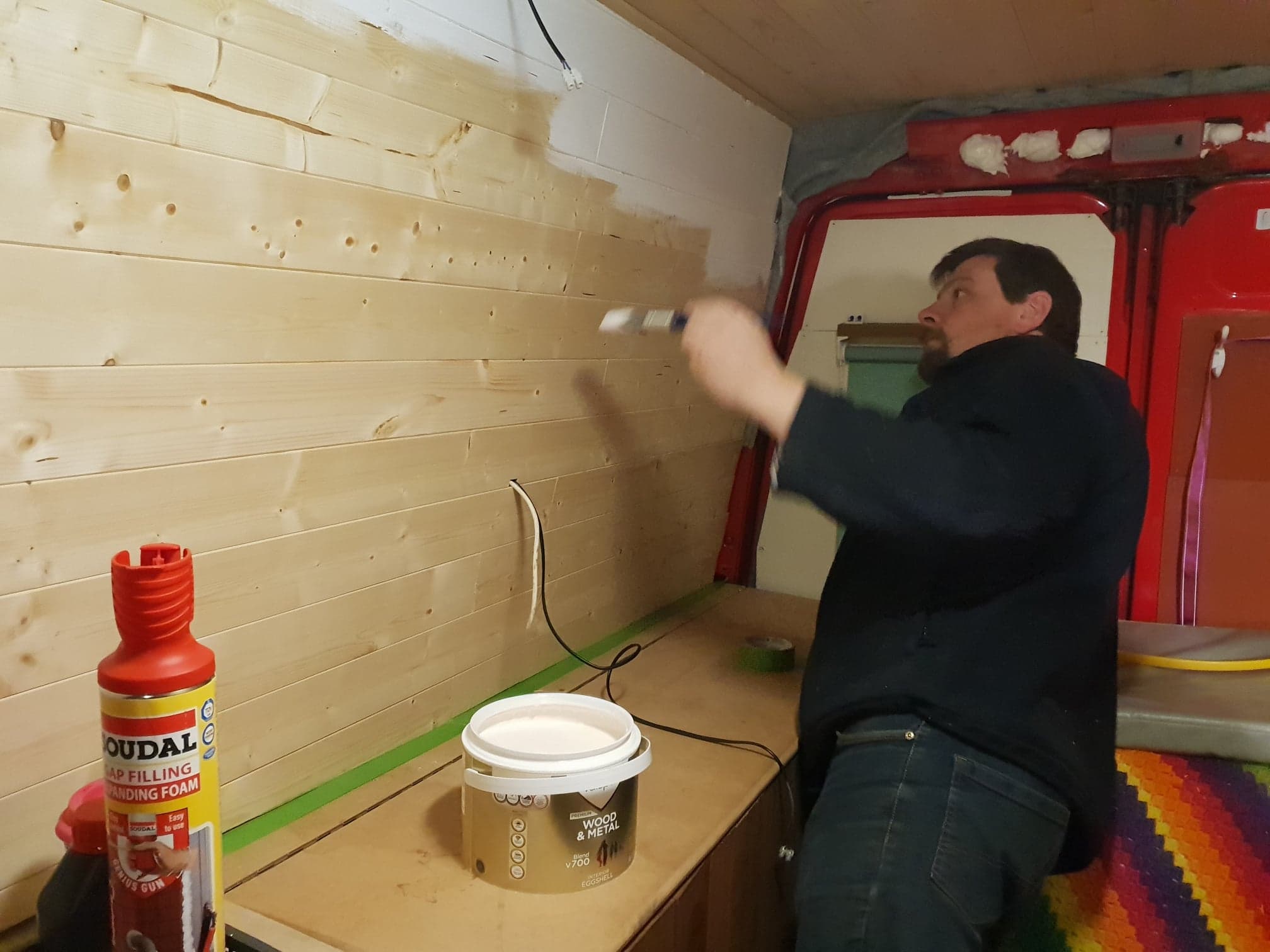 The coverage of this paint is excellent, as you can see from the photo of the first coat.  It went on really well and left exactly the finish I was hoping for. 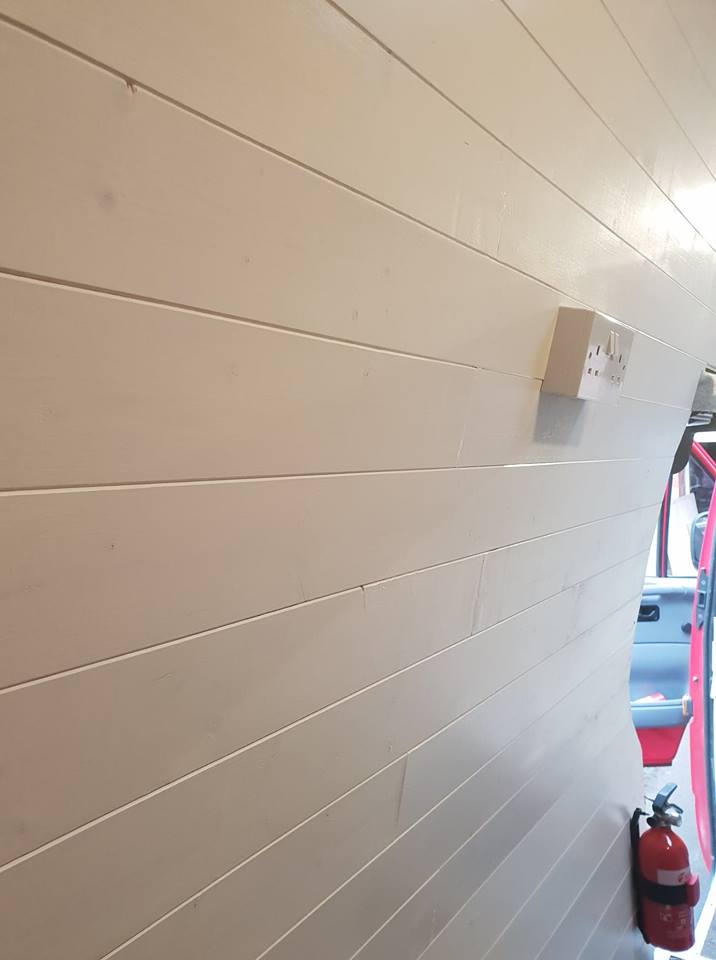 All that’s left to do is to make the front of the kitchen drawers the same as the rest of the wood, fit the flooring (that’s going to be an awful job because we’ve bought industrial strength safety flooring) and put some nice wood on the back doors so they match.

I’m really happy with how things are coming along with you.  I feel like a snail when we go out in it because it’s my home from home.  You can follow more of the stories on my Instagram account.

THANK YOU VERY MUCH TO VALSPAR FOR GIFTING US THE PAINT.

Written By
Lu Lovely
More from Lu Lovely
I eagerly await the delivery of my LoveLula Beauty Box each month...
Read More

0 replies on “Our Van Conversion With Valspar”

What did you have for dinner tonight? Did you cook

I discovered some truly beautiful cleansers whilst

Very soon, you'll see the launch of the new @nadra

We went to the Donkey Sanctuary in Sidmouth yester

It's my daughter's prom today. A momentous occasio

I met up with my brothers for breakfast at the wee

**Giveaway** I've teamed up with @butterwhips to offer you this bumper giveaway with lots of lovely green beauty products. . . . #GreenBeauty #CleanBeauty #CrueltyFreeBeauty #NaturalBeauty