Wednesday the 8th March 2017 is International Women’s Day.  A globally recognised day celebrating the social, economic, political and cultural achievements of women. It has been observed since the early 1900s.  In some countries, it’s recognised as a national holiday.  A day off for everyone, celebrating the brilliance of women!  I love it!

I feel uncomfortable describing myself as a feminist because that word has certain social connotations.  It conjures up images of man hating masculine women when that isn’t really the case at all.  It’s about expecting equal rights for women.  This isn’t just a women’s issue, it’s a human issue. 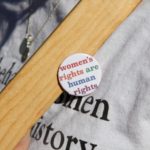 Women are getting more degrees, post graduate degrees and more PHds than men.  We’re better educated yet we’re still not being paid equal salaries.  Men are still being paid more handsomely for the same work, despite the Equal Pay Act being introduced some 46 years ago.  Last week, a Polish member of the European Parliament said that women should earn less because they are “weaker, smaller and less intelligent”.   Wow…

What about the women?

When you were at school, how many woman inventors did you learn about?  We learned about Benjamin Franklin and his bi-focal glasses.  Thomas Jefferson and his clock.  Alexander Graham Bell invented the telephone.  I don’t think we were taught about any female inventors at all.  Did you know that it was Marie Curie that discovered you could split an atom?  Grace Hopper compiled the first ever computer language!!  It was a woman that invented the 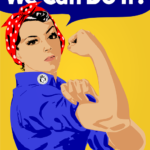 Gender equality isn’t exclusively an issue just for women.  Men are also subject to gender expectations.  They’re often still expected and under pressure to be the breadwinner within a family unit. When Dads are the full-time caregivers, they’re taken less seriously as a full-time parent.  There are still Mother & Baby rooms.  Baby changing facilities are still often within the women’s toilets.  We still have mother and baby groups.  People assume it’s the mother’s responsibility to home with the children.  Why is this?  Purely just because they have a womb?

I love this Girl Power T-shirt from Teespring.  Slogan T-shirts are really trending right now and 25% of the money goes to International Women’s Day.  Win, Win!

Written By
Lu Lovely
More from Lu Lovely
Mother Theresa said, It’s not how much we give but how much...
Read More