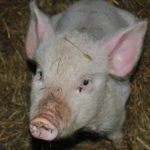 A couple of years ago, we decided to start rearing our own pigs for meat.  We started off with just one pig and we kept it at our allotment along with friends.  She was called Moo (Mu means pork in Thai).   We really enjoyed every aspect of rearing her.  Upon slaughter, she yielded 89 kg of dead weight.  That’s a massive amount of pork!!  We haven’t had a pig as heavy as Moo since.  I learned the hard way not to name our pigs with Moo.  I found it quite off-putting when the children proclaimed their excitement at having Moo for dinner and calling her by name.  Not for the faint hearted city girl in me!

It’s a good idea to do your research before making a purchase.  Also, do make sure you have a CPH number and a flock number prior to porking up.

Moo was a Gloucester old spot crossed with a saddleback.  I’d recommend this breed as a meat pig and for their temperament in general.  She was a super friendly and healthy pig.

We’ve reared other breeds, including the pure British lop (this was my least favourite – very slow-growing and we found the meat to be a little tough), oxford sandy blacks (these were lovely lean pigs that were ready at around 6 months, any later than that and they go to fat), tamworth cross oxford sandy blacks (not quite as fast growing but a good, long pig – my boyfriend thinks this is the ideal pig for bacon) and pietrain cross large white cross landrace (these are great – they’re the pigs we currently have running and they’re pretty large at around 5 months old.  These are a common commercial pig that gain weight quickly and are quick to mature with a very friendly temperament but not a great pig for outdoor rearing in the summer months because of their colouring).

Why Rear You Own Pigs?

I wouldn’t say that rearing meat is a financially rewarding option.  You don’t end up making any money from it (not the way we do it, anyway).  I love knowing that our meat has been reared in a happy, cared for and healthy manner.  We know what our pig has eaten and that it hasn’t been injected with anything.  Many farmers use antibiotics for treating sick animals, as a preventative to sickness and to promote and speed up growth.  There are concerns with regards to humans becoming resistant to certain antibiotics due to the resistance built up from preparing and eating the meat.  You can read more about it in this news article on the NHS website.  As a (nearly qualified) nutritional therapist, I really am a big advocate of knowing how my food has been raised and what it’s been eating.

You can buy a weaner piglet for around £30.  A bag of feed from a feed mill costs around £7-8 for a 25kg sack which would feed a pig for about a week, dependant on the age and size of the pig.  Arranging for a pig slaughter is simple.  We phone our local abattoir (we use this one – C Snell) and can usually book them in within the week – though they’re very busy around Christmas time.  The cost is roughly £25 for an average fully grown pig to be slaughtered and just cut in half.  They do offer a butchering service although I have no idea how much that would cost.  We butcher our own pigs following lessons from a local mater butcher.  I’d really recommend animal rearing for meat.  In addition to pigs, we also keep chickens, ducks, sheep, goats and turkeys.  Also, I’m not an expect, I’m telling you our experience.

Written By
Lu Lovely
More from Lu Lovely
As a soon-to-be university student parent, it can be challenging to know...
Read More